Over time, different airline companies have established a number of ultra-long haul non-stop flights. This article covers the longest flights among them. The opening of these super long routes can reduce the number of stops passengers must take to increase passenger comfort in the journey and reduce the time needed to travel between distant city pairs, although stopovers can also be rejuvenating in long-distance travel.[1] It also can help build ego and build loyalty among a set of flyers.[2] Thus there is competition among airlines to establish the longest flight.[3]

The term “longest flight” can mean numerous different things. The most commonly used metric would be for distance between the origin airport and destination airport, but it can also refer to longest in term of time needed to fly the route or the distance actually flown by the aircraft (when a longer route can use the jet stream to actually reduce total travel time). Also, although the term is most commonly used to compare between different non-stop flights, direct flights with stops (same flight number used for full journey) might also be compared in some occasions.

The “world’s longest flight” has disputed status due to the generality of such a claim. While the distance between two cities is constant, aircraft do not follow a straight path but will adjust the flight path based on headwinds and tailwinds and other weather events, and to avoid flying over certain countries because of politics or war.[4]

In March 2020, an Air Tahiti Nui Boeing 787-9 performed the longest-ever scheduled passenger flight by distance, flying non-stop from Faa’a International Airport in Papeete, Tahiti to Paris Charles de Gaulle Airport.[7] Usually, the aircraft has a refuelling stop at Los Angeles International Airport, and all passengers disembark the aircraft and pass through U.S. Customs and Border Protection before reboarding and continue to Paris. However, due to COVID-19 pandemic restrictions, the service opted not to stop at Los Angeles. The one-off flight was also made possible by the aircraft’s reduced passenger load, which eliminated the need to refuel. The aircraft flew for just under 16 hours and covered a distance of 9,765 miles (15,715 km; 8,486 nmi), slightly longer than the flight between Singapore and Newark operated by Singapore Airlines. The flight also set a record for the world’s longest domestic flight, as it flew between French territories.

Routings may avoid the shorter ground distance of a great circle route to use tailwinds to save time and fuel, shortening the equivalent still-air distance. Typically, the longest flights measured by ground distance traveled are Singapore Airline’s flight 21/22 from Singapore to Newark. Both of these routes have the geometrically optimal great circle route near the North Pole, but rather choose to fly over the Pacific Ocean where the assistance of the jet stream is available to save flying time and fuel. The Air India flight from New Delhi to San Francisco flies a longer distance over the Pacific Ocean instead of a shorter route over the Atlantic Ocean to avoid prevailing westerly head winds.[8] AI173 and AI183 fly about 15,100 km (9,300 mi) making it one of the longest non-stop flights.[9][10] In general, both of these flights travel about 15,300 km (8,261 nmi; 9,507 mi) in ground distance, and it is not unheard of for particular flights to cover more than 16,000 km (8,639 nmi; 9,942 mi). However, for both of these flights, the great circle distance is among the top 30 longest.[11][12] 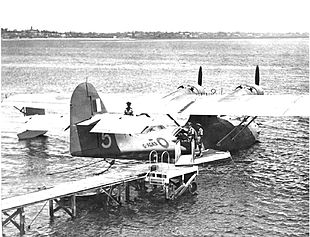 From 1943 to 1945, Qantas operated “The Double Sunrise”, a weekly 5,652 kilometres (3,052 nmi; 3,512 mi) flight between Perth, Australia and Koggala Lagoon in Ceylon (now Sri Lanka) with average flight times of 28 hours, using a Consolidated PBY Catalina.[14] One of these flights remains the record holder for longest time airborne (for a commercial flight) at 32 hours, 9 minutes.[15]

On 28 August 1948, a Martin Mars JRM-2 flying boat, the Caroline Mars, completed a non-stop flight from Honolulu, Hawaii to Chicago – flying a distance of 4,748 miles in 24 hours and 12 minutes.

In August 1967, Aerolíneas Argentinas established its non-stop Boeing 707-320B service on a 10,063 kilometres (5,434 nmi; 6,253 mi) route between Madrid and Buenos Aires with a flight time of 12 hours.[18]
The arrival of the more fuel-efficient turbofans made easier the possibility of longer flights.

The dissolution of the Soviet Union eventually opened the airspace over Russia, allowing new circumpolar routes to come into use for commercial airlines.[20] On March 1, 2001, Continental Airlines launched a 12,980 kilometres (7,009 nmi; 8,065 mi) non-stop service from Newark to Hong Kong flying Boeing 777 aircraft. The duration of the non-stop flight exceeded 16 hours.[20] Within a month, United Airlines started its own New York City-JFK to Hong Kong service with Boeing 747-400 aircraft, adding 11 kilometers to the distance.[20]

In the late 2000s/early 2010s, rising fuel prices coupled with the Great Recession caused the cancellation of many ultra-long haul, non-stop flights.[24] This included the services provided by Singapore Airlines from Singapore to both Newark and Los Angeles that were ended in late 2013.[25][26] But as fuel prices have since decreased and more fuel efficient aircraft have come into service, many ultra-long haul routes have been reinstated or newly scheduled.[24] 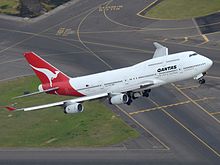 A number of promotional or delivery flights have extended the record of longest non-stop flights by a commercial aircraft.

Four months later, on March 25, 2006, British Airways (BA) used a similar Boeing 777-200ER to fly the longest commercial non-stop flight with paying passengers, when chartered by UK Prime Minister Tony Blair and his entourage of staff and journalists to fly from meetings in Brussels, traveling non-stop to ensure their attendance at the closing ceremonies of the 2006 Commonwealth Games in Melbourne.[33] The flight, covering 17,157 kilometres (9,264 nmi; 10,661 mi) and lasting 18 hours, 45 minutes, included a BA staff of 20 to facilitate cockpit and cabin crew rotation during the flight.[33]

According to a published report in September 2015, Miami International Airport (Florida) was in talks with EVA Air and China Airlines of Taiwan to launch before 2018 a nonstop 13,922 km (7,517 nmi; 8,651 mi) flight to Taipei.[44] In June 2016, a chartered China Airlines Boeing 777-300ER carrying Taiwan President Tsai Ing-wen flew non-stop from Taipei to Miami before continuing to Panama. The airport director spoke with President Tsai about the opportunity for scheduled service between Miami and Taipei.[45] The airport has been actively pursuing a non-stop flight to East Asia since 2015. There are no non-stop passenger flights between Florida, the third-most populous state in the U.S., and East Asia.[46][47] In May 2017, the region’s aviation department director predicted such a flight would happen within the next 24 months.[48]

El Al is planning a Tel Aviv – Melbourne route, a great-circle distance of 13,736 km (7,417 nmi; 8,535 mi),[56] and has already tested it with an actual flight distance of 14,594 km (7,880 nmi; 9,068 mi).[57] The longer flight distance was due to flights to and from Israel not being allowed to traverse Saudi Arabian air space. In September 2020 it was announced that Saudi Arabia will, for the first time, permit Israeli airlines to operate over its territory.[58] This will make it possible to operate this flight along the great circle route.

Many long-haul, non-stop routes that used to be uneconomical to operate are being made viable by the Airbus A330neo, the Airbus A350 XWB, the Boeing 777X, and the Boeing 787 Dreamliner.[67]

The following table lists the world’s longest non-stop scheduled passenger routes by “great circle” distance. The actual distance flown, however, can be longer than the great circle distance for a variety of reasons, such as avoiding severe weather, taking advantage of favorable winds aloft, detouring around closed airspace, and diverting around war zones.

‡This was the world’s longest flight from its commencement in 1996 until its cancellation in 1998. Now operates to nearby Hong Kong International Airport with the Boeing 777-200ER aircraft.

The sections below gives two separate views.
The first one lists all the commercial aircraft types used for serving non-stop flights and their currently scheduled and operating longest flight. The second section attempts to list all the passenger airline companies in the world and their longest scheduled non-stop flight currently in operation.

The table below lists the current longest (by great circle distance) non-stop flights operated by different types of aircraft.

The table below lists the longest (by great circle distance) current and historical regularly scheduled non-stop revenue flights operated by different types of aircraft. The table does not include special promotional or delivery flights, such as shown above.

The table below lists international airline companies with their longest (in mileage) non-stop flight currently in operation.

^b Air India’s flight from Delhi to San Francisco generally takes a longer time but has a shorter great circle distance (GCD) than the flight from Mumbai to Washington.